Midwestern Visitors Bureau Recognized as One of the Best… in the South?

I have spent my entire life, with the exception of a year or two, as a denizen of the South. Born and raised in North Carolina, with my only short departures to Tennessee and Costa Rica (WAY South,) I figured- or “reckoned,” in Southern vernacular- I knew a few things about what constituted as being Southern. Sweet tea? Southern. “Bless your heart?” Southern. Grits? Definitely Southern. The South for me has always been that swath of states that border Georgia and Alabama; even Virginia and Kentucky were stretching the geographical limits.
Imagine my surprise, then, to discover that the South would now like to add Missouri to their roster. A recent award from ConventionSouth honored Columbia Convention and Visitors Bureau as one of the top ranked CVBs in the South, an award that they would never have been considered for prior to 2012, because Missouri is not in the South.
What lies behind the sudden influx of Southern interest in College Town, USA, is the recent transition of Mizzou athletics from Big 12 North to the SEC, a larger, wealthier conference that includes schools from all over the South, including Florida, Kentucky, and Arkansas. A new conference means new rivals, (I hear it’s the Razorbacks now?) and increased national visibility. Whereas the Big 12 kept us competing with other Midwestern schools, the SEC opens the door to MU’s recognition on a semi-national scale.
Of course, the sports program isn’t the only reason why Columbia is suddenly coming into prominence. Although 2007’s Big 12 Conference championship may have played a part in the boost in enrollment in the four years that followed, the real reason is the university itself. 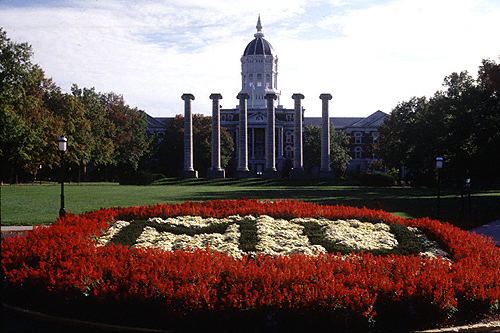 As one of my colleagues put it, “The University is the lifeblood of this town, and anyone who denies that is blind.” It’s true: a third of our city’s population is the student body of Missouri’s flagship school. Mizzou is a hub for students seeking world class educations in journalism, science, English, agronomy… the list goes on, and the quality of education these students receive has attracted businesses from many different segments of the economy right into our backyard.
A great way to build an economical, skilled workforce in any sector is by employing new graduates; they are eager for real world experience, and the company is glad to give them the training and guidance they need in exchange for lower costs in payroll. To be clear, we’re not talking about employers offering less than typical entry level pay; we’re talking about increasing the number of available positions specifically for entry level employees. Companies want fresh talent that can be molded into ideal employees, and they want them to come from nationally ranked programs.
Columbia’s economy leans very heavily on white collar, educated professions, and this fact alone illustrates my point. We live in an area surrounded by vast and largely rural land; what reason would industries such as insurance, medicine, and agro-chemistry have to establish centers here other than the draw of our universities? We have quality schools that produce quality employees, which in turn attract quality opportunities.
This scenario goes both ways, too. As economic opportunity grows for recent graduates, so does the number of soon-to-be-recent graduates. The universities in town are growing at a tremendous rate- Mizzou alone expects enrollment to top 40,000 within the next few years, making it one of the largest schools in the area, even within the SEC as a whole, falling third behind only Florida and Texas A&M. This growth has brought with it other industries as well; construction is in full swing, not only on new student housing, but on starter homes for these students as they graduate and join the workforce. Economic improvement within the city is bringing with it more leisure offerings, and clever proprietors are offering one-of-a-kind shopping experiences in the heart of town.

This constant boom is feeding a newer industry here in Columbia- tourism. In the past, traveling to Columbia was strictly about Big 12 football, and most of the tourists were coming from the same region, driving a few hours, catching the game, and then heading home. Now, with SEC visibility and national attention, suddenly everyone wants to come to Columbia and catch a game. Columbia Regional Airport has partnered with American Airlines to broaden major hub service options, with service to Chicago and Dallas twice a day. Fine dining opportunities keep popping up; niche shopping options and unusual venues offering top entertainment are drawing bigger and better names. Columbia is coming into its own as a city; a destination apart from sports games.
All of this brings us back to the Columbia CVB, and their recent award. This sudden growth and expansion has kept the CVB’s hands full, and they’ve done an admirable job of adapting to the new marketing demands that conference changes and rapid expansion have sent their way.  Their current campaign, “What you unexpect,”does a great job of capturing the vibrancy of growing Columbia in  just a few words and select images, and they’ve been very smart about placing their ads so that they are getting high impact placements. They deserve that recognition and more for their efforts; shifting into the SEC brought them new demands for a broader, newer audience, which has finally given them (and our city) their due in the way only fresh audiences can.
So, while I’m not holding my breath waiting for Missouri to suddenly get warmer winters and longer vowels, I’m thankful for this sudden Southern charm extending our way. If the South wants us, we’ll welcome them.